Father Sean Broderick, a Spiritan Father for 53 years retired on October 31, 2018 after 14 years of dedicated service to Mary Mother of God Parish.

Father Sean was born and raised in the Republic of Ireland and ordained a Holy Ghost priest for the missions in Africa. He returned to Ireland after 20 years to be an educator and later became President of Rockewell College in Tipperary.

In 2004 Father Sean transferred to Mary, Mother of God Parish as the Assistant to the Pastor and ultimately became the Administrator of the Parish in 2007.

During his tenure as Administrator, Father Sean initiated the redesign and renovation of the church, continued the highly successful CYO programs, supported programs for Boy Scouts and Eagle Scouts and provided twelve years of religious education for catechists within the Mary, Mother of God parish community.

Father Sean authorized and implemented the Virtus Program for all teachers and Mary, Mother of God Church personnel to ensure the children of the parish are protected and taught in a safe environment.

Father Sean has generously opened the church parking lot to the Triangle Elementary School buses and the church hall for senior citizens’ events. He also established a video system for transmitting the Sunday morning mass to township nursing and assisted-living homes.

He has encouraged and participated in the Interfaith Hospitality Network (IHN) that helps homeless families get back on their feet.  He also served as one of the Hillsborough Police chaplains for ten years.

The Hillsborough Township Committee is thankful and appreciative for the selfless dedication Father Sean Broderick has shown as Administrator of Mary, Mother of God Church and in the community of Hillsborough. 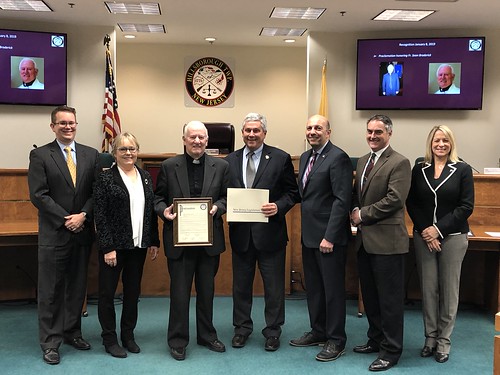