Lipani and Holmes Sworn In as Committee Members

Hillsborough Township Committee selected Frank DelCore as Mayor and Doug Tomson as Deputy Mayor for 2019, at the Annual Reorganization meeting of the Township on Wednesday evening.

DelCore brings extensive knowledge and experience to the position of Mayor, beginning his 12th year on the Committee and 5th term as Mayor. During his tenure on the Committee, DelCore served as liaison to many boards and functional areas including Public Safety and Emergency Services, Economic and Business Development Commission, Hillsborough-Millstone Municipal Alliance, Parks Commission, Recreation Commission, Sign Review Committee and most notably the Finance Committee.

Following the Oath of Office of Mayor administered by Senator Bateman, DelCore assumed the role of presiding over the remainder of the meeting with the next order of business being the selection of the Deputy Mayor. Doug Tomson was given the nod for a consecutive term in this position.

Prior to the selection of Mayor and Deputy Mayor, at the onset of the meeting, Shawn Lipani and Olivia Holmes were sworn into their positions of Committee Members. Lipani had won re-election in November, after completing an unexpired term. Committeeman Shawn Lipani was sworn in by former Assemblyman Jack Ciattarelli and Committeewoman Olivia Holmes was sworn in by Assemblyman Roy Frieman.

During his Mayoral remarks, DelCore thanked his family, friends, colleagues and the residents of Hillsborough for their continued support. “It is my honor to be given the opportunity to serve as Mayor for 2019,” commented newly selected Mayor DelCore. He additionally, noted and thanked former Mayor and Committeeman Carl Suraci for his many years of dedicated service to the Township.

Mayor DelCore also recapped 2018 highlights, including the 3rd year in a row of no municipal tax increase, an ordinance to fund roadway improvements, a very strong AA+ credit rating, the purchase of additional property at the GSA which resulted in the prevention of additional residential development as well as reducing overall affordable housing requirement and the Master Plan completion.

He continued by confirming the focus in 2019 now becomes fiscal prudence in managing the Township’s finances while monitoring the affordable housing requirements mandated by the State, which remains a priority. Continued work with NJDOT on the Route 206 bypass progress as well as further development of the Township’s park areas and trail systems will also be on the radar for 2019. Mayor DelCore assured residents despite the Governor’s potential legalization of recreational marijuana use, Hillsborough will not permit dispensaries within the Township.

During the meeting, Deputy Mayor Doug Tomson was also sworn in by Senator Bateman. Tomson was sworn into his first term on January 3, 2012. He served as Deputy Mayor in 2013 and 2018 and served as Mayor in 2014 and 2015. He has served as liaison to Agricultural Advisory Committee, Board of Education, Cable Advisory Committee, Board of Health, Local Assistance Board, Library Council, Recreation and Parks Commission, and the Youth Services Commission.

“I am looking forward to supporting the Mayor this year and I promise to continue to honorably serve the public as they expect from their local government,” commented Deputy Mayor Tomson.

The meeting concluded with the appointments to various Township Boards and Commissions for the year 2019 which was followed by light refreshments in the multi-purpose room. 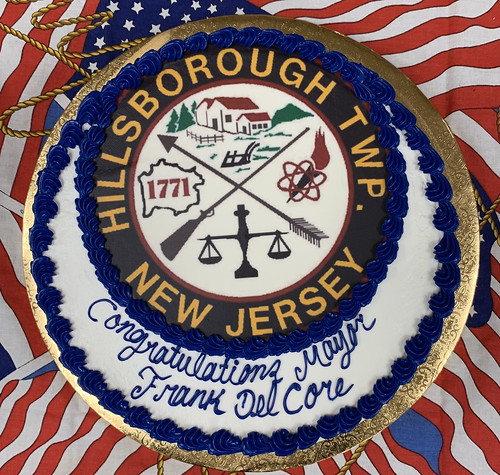